Phenome Soundfont Player - Everything you need and more! 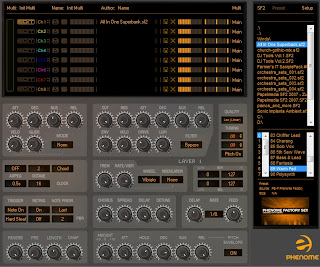 Yes, this Blog has been abandonned for quite a time, but now it goes on with a real goodie. In the ole times, when the Internet was still steam powered and VST Plugins (with sufficient quality) were either rare or not existant at all, there was a file format for audio samples, which went out of fashion these days: The Soundfonts. You can imagine a soundfont pretty much like a script font, just for audio samples. Sounds of real instruments were sampled on different notes and then packed into a soundfont. The format allows it also to store more than one instrument in a soundfont file, thus you can create sound libraries with soundfonts.

Now the musician of the year 2013, who is spoiled by often quite sophisticated simulation VSTs, asks himself, why one should use that "dinosaur format" still today. I found out, that most of the loving handcrafted soundfonts, which are by the way mostly free these days, sound a lot better than some of the quite expensive VST simulators. And you can find real gems out there, and sometimes instruments of which no other digital representation is available.

So, a while ago, I stumbled again across my huge collection of soundfonts and thought I was up for some nostalgy. In the end that proved to be a good idea, because I urgently needed some "ethno sounds" for some songs I was working at for my project Cimelium. And I found exactly those sounds amongs my soundfonts.

The problem now was, that the VST plugin I needed to use soundfonts in my DAW (FL Studio), a Soundfont Player, was only available as a demo version in my FL Studio. So I couldn't save and load projectfiles using it. I needed a good free soundfontplayer VST. I used the SFZ Soundfontplayer by rgc::audio in the past from time to time, but the problem with SFZ was, that if you put more than one instance of it into a project (at least with FL Studio) it creates a hell of a noise. This tells me, that it is not threadsafe coded  and one instance interferes with the other. Because the songs for the Cimelium project required the use of more than one soundfont, I needed a replacement. I browsed thru some forums and only got one answer: "SFZ, what else?".

By surprise I found a link to the Phenome Soundfontplayer and I was instantly excited and puzzled at the same time. I just wanted a simple soundfont player and not that... complicated... looking... THING! Well, I understood right from the start, what the knobs were doing, but still it was more than I expected. After a short while I understood the basic handling of soundfonts with this VST and it worked really well. By and by I learned also about the little addons, which revealed their secrets by and by to me.

The first thing I really liked was the fact, that it would be a really rare occasion to have to use more than one instance of the plugin in a DAW. Phenome offers the possibility to load up to 8 soundfonts and trigger them via MIDI channels. This in combination with multiinstrument soundfonts should do the job. I still tested the use of multiple instances in FL Studio and came across no problems.

Part of the basic feature set of a usable soundfontplayer is the envelope, which of cause isn't missing in Phenome. Phenome is also not the only soundfontplayer which comes with an effects section featuring Reverb, Delay and Chorus, but Phenome delivers, not just for a free plugin, a great ammount of quality here. Additionally there is a distortion effect and a knob labeled "LOFI", which I identified during tests as some kind of a ringmodulator. Those two knobs are in the filter section, which, in a spartanic style, offers everything a filter section needs.

A nice extra is the, also spartanically/classically designed arpeggiator section, which surprises with a nice and usefull chordfunction. The arpeggiator runs solid and does no gaps and glitches. A nice other feature, especially in combination with the arpeggiator, is the pitch envelope section, which allows a variety of interesting sound experiments.

You see: The Phenome Soundfontplayer is not just a spartanic sampleplayer, but a full featured playground for sophisticated soundfiddlers. Many dusted soundfont oldtimers get a second life and the gems from the collection also sound in a brandnew way. Conclusion: A must have!

DOWNLOAD THE PHENOME SOUNDFONTPLAYER FOR FREE!
Posted by alionsonny at 7:04 PM