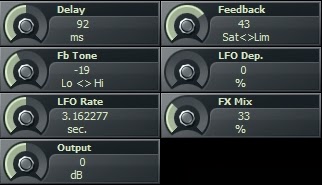 I do not know when this VST effect saw the light of the world. It must have been long before the time when I even thought about to produce music digitally. And it even gathered dust in my collection for quite a long time without ever being used. This was, because there were enough shiny plugins with a well-designed user interface, which had, in my opinion, everything I needed for my Dub adventures. It was just some time ago, when I realized that this plugin has some good, already "well wired" features, is very resource-saving and simply great fun to work with.

mdaDubDelay brings no own GUI, which is why only the look in FL Studio is shown above. This plugin uses the VST GUI representation of the respective host application. As briefly mentioned above, I have neglected this baby because (Image Line and the fans of the FL GUI may forgive me) the representation of native VSTs in FL Studio simply is not appealing. Yes, even I am sometimes guided by the appearance of something ;). The developers at Smartelectronix probably did not want to waste much time on superficialities.

Under the hood, the mdaDubDelay has a lot to offer. As the name suggests, everything is centered around the delay effect. Anyone expecting an all-in-one Dubmachine is wrong here. Allow me to describe the controls one after the other:

Here I would like to say that I, as someone who likes to automate effects, do not use the LFO functionality for modulation. Somehow the mdaDubdelay unfortunately cannot be synchronized to the VST host. When using the LFO functions, this causes the effect to sound different, each time the song is played. What is perhaps even desirable for live dubbers, drives you rather insane when automating. My solution to this is, to automate the "Delay" knob, which actually produces the same effect. If you want get the same effect of the built-in LFOs without synchronization problems, just automate the "Delay" knob using a corresponding sine function.

Another thing to note (at least for less experienced people in using extreme effects ) is as follows: The use of certain, especially extreme settings can very quickly cause very loud or extremely low- or high-frequency sounds. A limiter and the well known equalizer precautions should not be forgotten here. TIP: If certain automation causes very loud signals, this can be easily solved by automating the "Output" knob... and that before the signal crashes rampantly into the limiter ;)

As always, I close this posting with the stability and resource use: For a dinosaur amongst the VSTs such as this, I do not really need to say anything about the use of resources. What ran smoothly on a Pentium of the first generations and with minimal RAM, runs more smoothly on today's equipment. Also crashes or freezes of the DAW never occurred. I can not say anything about the use of multiple instances, because I never had more than one instance per song project in use.

The mda DubDelay comes together with many small useful VSTs in the free Smartelectronix VST Bundle. It can be downloaded (for Windows and MacOS) HERE.